NANBIOSIS - ICTS Infrastructure for the production and characterization of nanoparticles, biomaterials and systems in biomedicine 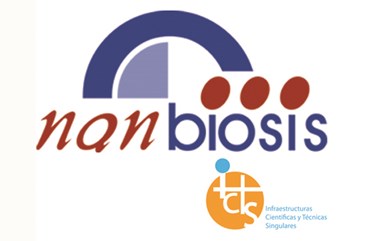 NANBIOSIS is one of the 29 ICTS (Singular Scientific and Technological Infrastructures) recently recognised by the Consejo de Política Científica, Tecnológica e Innovación (CPCTI of the MINECO). NANBIOSIS offers complete services for the production and characterization of nanomaterials, biomaterials and systems in biomedicine. This ICTS is integrated by the Biomedical Research Centre on Bioengineering, Biomaterials and Nanomedicine (CIBER-BBN) and the Centro de Cirujía Mínima Invasiva Jesús Usón (CCMIJU - Jesús Usón Minimally Invasive Surgery Centre).

NANBIOSIS is an integrated platform with cutting-edge scientific and technological infrastructure and its scientific coordinators from the different units are among the best Spanish researchers in the areas integrated in the scope of activity of the infrastructure.

NANBIOSIS consists of 27 units coordinated under a one-stop shop model. Together, these units offer a complementary service including the design and production of biomaterials and nanomaterials as well as the characterization of these bio- and nanomaterials, tissues, medical devices and systems from a physicochemical, functional, toxicological and biological viewpoint (including the preclinical validation), focusing on biomedical applications.

All this potential, which allows from developing a therapeutic agent to entering the preclinical validation, under the auspices of NANBIOSIS, backed by some of the best Spanish research groups in bioengineering, biomaterials and nanomedicine, is open to the scientific community under specific conditions, as described in the following Access Protocol.

CIBER-BBN coordinates these services and facilitates their access through the “one-stop shop model”.